Are Your Household Products Increasing Your Likelihood of Diabetes?

After your refreshing shower, you reach for your deodorants and perfumes to carry you throughout your day. However, these ‘life-saving’ utilities have ironically been claimed to be life-threatening. Do such products, along with many others, actually, have a causal relationship with the development of diabetes?

Claims have been circulating that suggest a relationship between diabetes onset and certain chemicals. This list of chemicals constitutes dioxins and phthalates. Dioxins are toxic chemicals byproducts of chemical processes, including the burning of waste or fuel or the production of pesticides. After becoming airborne, these chemicals quickly settle in the soil and are, in this way, transported to our food and water supply. Once dioxins have been ingested, they remain in our bodies for several years. Phthalates are commonly found in soft plastics and are used to create solvents. They are also most often found in products that list the word “fragrance” in their ingredient list, such as makeup and perfume.

Diabetes, or diabetes mellitus, was the seventh leading cause of death in the United States in 2017. Diabetes is an impairment in how our body regulates and uses sugar, specifically glucose. Glucose is necessary for our body as it provides fuel and energy for the metabolic activities of our cells. This long-term condition, however, causes there to be far too much sugar in our bloodstream. High blood sugar levels, termed hyperglycemia, can lead to immune, circulatory and nervous system disorders. However, the symptoms of diabetes are not always very dramatic and often go unnoticed, with millions living with the illness without realizing it, therefore, deeming it the name “silent killer.” Diabetes can occur in both childhood and adulthood, but type 2 diabetes is more common in adults. However, increasing rates have been seen in children, which has been correlated with the rising levels of obesity among children. Since treating diabetes is a long and expensive process, deriving treatments for prevention is definitely more favourable.

Contrary to popular belief, diabetes is not caused by too much sugar intake and is, therefore, not self-induced. Blood sugar levels are governed by insulin, a hormone produced by beta cells in your pancreas, a gland located below and behind the stomach. Sugar in the bloodstream that has been digested from food or released by the liver triggers insulin secretion. The hormone allows sugar to enter your cells so that it can be used. When the sugar levels in your bloodstream drop, insulin production also decreases. However, in diabetes, this mechanism is flawed.

There are two types of diabetes, type 1 diabetes and type 2. Type 1 diabetes refers to when your immune system destroys insulin-producing beta cells by mistake, which depletes the body’s ability to produce insulin in the first place. This form of diabetes is usually genetic and will not be the focus of this article. On the other hand, type 2 diabetes is characterized by an insufficient amount of insulin produced by the pancreas or insulin resistance which involves cells in your liver, muscle, and adipose tissue not responding well to insulin and therefore not effectively taking up glucose from the bloodstream. It is important to note that insulin resistance can occur in individuals without diabetes, but it often leads to the onset of prediabetes or type 2 diabetes if left unchecked.

Since the 1980s, over 100 peer-reviewed studies have been published examining the relationship between diabetes and dioxins. Looking specifically at the dioxin TCDD, it is already a confirmed carcinogen (cancer-causing agent). Similar to other dioxins, it is linked to many complications in the human body, most notably ischemic heart disease, chloracne (an acne-like skin illness), and type 2 diabetes. TCDD is extremely lipophilic, bioaccumulates, and resists metabolism. Exactly how dioxins operate in the human body is still being investigated and confirmed. However, scientists are now certain that in this complex chemical pathway, the first step occurs when dioxin binds to the aryl hydrocarbon receptor (AhR), an intracellular protein. This binding induces the AhR to alter and interfere with the function and expression of particular genes. Genes are responsible for all our cells to function normally. Therefore, this imbalance promotes adverse health conditions. Specifically, AhR mediates the development of insulin resistance and diabetes. 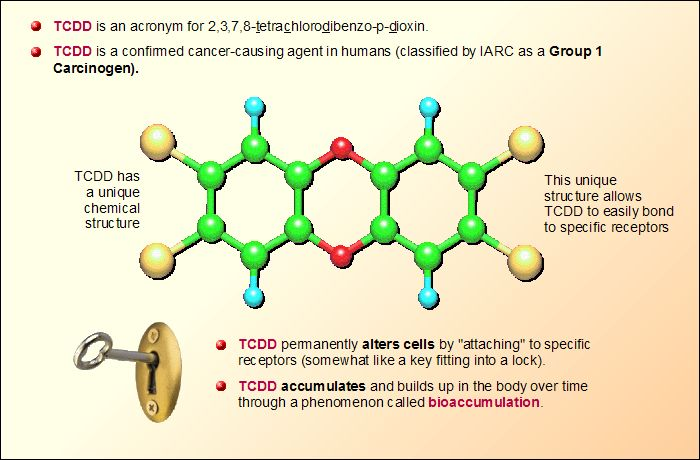 Chemical compatibility is necessary for any substance to bind to a specific protein, such as AhR. TCDD is unique as its structure makes it highly amenable to protein receptor bonding. However, TCDD is not the only chemical that binds to AhR. Therefore, public health officials take into account that individuals are often exposed to a mixture of DLCs (dioxin-like compounds) and dioxins rather than just one.

Laboratory studies on animals have supported the above claim that TCDD can be linked to insulin resistance. However, results from epidemiologic studies are inconsistent. These studies look at exposure to TCDD and the resulting glucose homeostasis. For example, some studies portray significant positive correlations between diabetes and exposure to Agent Orange (TCDD-contaminated) by Vietnam veterans, but others do not. In the SWHS (Seveso Women’s Health Study), diabetes diagnosis at a time period of thirty years after exposure to TCDD levels in serum was not conclusive. Operation Ranch Hand veterans experienced lower insulin sensitivity. Residents near a Superfund site contaminated by TCDD were found to have higher insulin levels. Non-diabetic individuals inhabiting a deserted Taiwan pentachlorophenol factory showed increased insulin resistance when exposed to high serum levels of dioxin.

The variability in results makes it evident that the circumstances and type of exposure do have an impact on if dioxin exposure will result in diabetes onset. Further studies need to be conducted to satisfy this inquiry. However, medical officials have begun considering TCDD as a risk factor for diabetes.

Most previous studies on this group of chemicals have focused on child development and reproductive health complications as scientists believe they impact sex hormones by acting as endocrine disruptors. However, recently they have been cause for investigation because of their possible negative impact on the health of seniors, individuals over age 65. The study showed that the prevalence of diabetes increased when the subject was overweight or had high levels of blood cholesterol. This risk doubled when phthalates became a factor. Lind, an associate professor at Swedish Uppsala University, says, “even at relatively low levels of phthalate metabolites in the blood, the risk of getting diabetes begins to rise.”

Nonetheless, this study only shows a positive correlation and does not, by any means, indicate a causal relationship between the presence of phthalates and diabetes. On this matter, Lind states, “further studies are needed that show similar associations…experimental studies are also needed regarding what biological mechanisms might underlie these connections.” Therefore, without the presence of more experimental evidence, it can not be said with certainty that phthalates cause diabetes.

While confirmations of causal relationships between phthalates and some dioxins are still pending, these chemicals have been proven to be toxic and cause other adverse health effects; there is more evidence to support claims on dioxins, specifically TTCD, than phthalates. 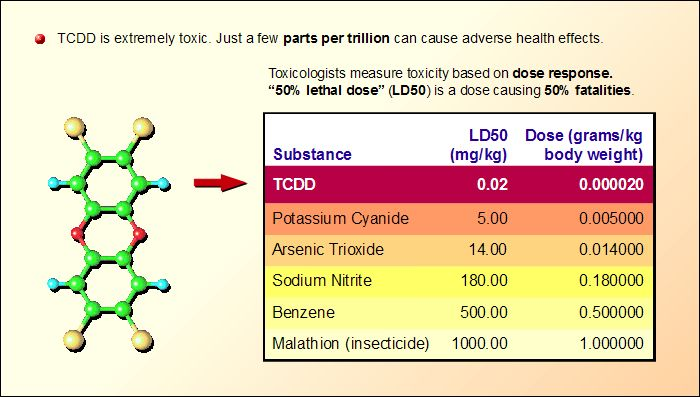 How to reduce dioxin exposure

More than 90% of human exposure to dioxins arises from consumed food. To reduce dioxin exposure:

How to reduce phthalate exposure

You can find phthalates in:

Several other precautions can be taken to avoid dioxins and phthalate exposure. It is crucial to continue educating yourselves on these topics as new studies continue to be conducted and analyzed. Due to their confirmed adverse health impacts, exposure to these chemicals should be minimized as much as possible.

Osborn, C. O. (2020, October 28). What Are the Differences Between Type 1 and Type 2 Diabetes? Healthline. https://www.healthline.com/health/difference-between-type-1-and-type-2-diabetes#How-does-diabetes-affect-the-body